“I was just curious why,” said Dr. Sato, a professor of geology from Tokyo Gakugei University in Japan.

For paleontologists like Dr. Sato, layers of bedrock represent an accumulation over hundreds of millions of years, and the Lower Jurassic is much older than the Upper Cretaceous.

But here in the Creation Museum in northern Kentucky, Earth and the universe are just over 6,000 years old, created in six days by God. The museum preaches, “Same facts, different conclusions” and is unequivocal in viewing paleontological and geological data in light of a literal reading of the Bible.

In the creationist interpretation, the layers were laid down in one event — the worldwide flood when God wiped the land clean except for the creatures on Noah’s ark — and these dinosaurs died in 2348 B.C., the year of the flood.

The worlds of academic paleontology and creationism rarely collide, but the former paid a visit to the latter last Wednesday. The University of Cincinnati was hosting the North American Paleontological Convention, where scientists presented their latest research at the frontiers of the ancient past. In a break from the lectures, about 70 of the attendees boarded school buses for a field trip to the Creation Museum, on the other side of the Ohio River.

“I’m very curious and fascinated,” Stefan Bengtson, a professor of paleozoology at the Swedish Museum of Natural History, said before the visit, “because we have little of that kind of thing in Sweden.”

Arnold I. Miller, a professor of geology at the University of Cincinnati and head of the meeting’s organizing committee, suggested the trip. “Too often, academics tend to ignore what’s going on around them,” Dr. Miller said. “I feel at least it would be valuable for my colleagues to become aware not only of how creationists are portraying their own message, but how they’re portraying the paleontological message and the evolutionary message.”

Since the museum opened two years ago, 750,000 people have passed through its doors, but this was the first large group of paleontologists to drop by. The museum welcomed the atypical guests with the typical hospitality. “Praise God, we’re excited to have you here,” said Bonnie Mills, a guest service employee.

The scientists received the group admission rate, which included lunch.

Terry Mortenson, a lecturer and researcher for Answers in Genesis, the ministry that built and runs the Creation Museum, said he did not expect the visit to change many minds. “I’m sure for the most part they’ll be of a different view from what’s presented here,” Dr. Mortenson said. “We’ll just give the freedom to see what they want to see.”

Near the entrance to the exhibits is an animatronic display that includes a girl feeding a carrot to a squirrel as two dinosaurs stand nearby, a stark departure from natural history museums that say the first humans lived 65 million years after the last dinosaurs.

“I’m speechless,” said Derek E.G. Briggs, director of the Peabody Museum of Natural History at Yale, who walked around with crossed arms and a grimace. “It’s rather scary.”

Dr. Mortenson and others at the museum say they look at the same rocks and fossils as the visiting scientists, but because of different starting assumptions they arrive at different answers. For example, they say the biblical flood set off huge turmoil inside the Earth that broke apart the continents and pushed them to their current locations, not that the continents have moved over a few billion years.

“Everyone has presuppositions what they will consider, what questions they will ask,” said Dr. Mortenson, who holds a doctorate in the history of geology from Coventry University in England. “The very first two rooms of our museum talk about this issue of starting points and assumptions. We will very strongly contest an evolutionist position that they are letting facts speak for themselves.”

The museum’s presentation appeals to visitors like Steven Leinberger and his wife, Deborah, who came with a group from the Church of the Lutheran Confession in Eau Claire, Wis. “This is what should be taught even in science,” Mr. Leinberger said.

The museum founders placed it in the Cincinnati area because it is within a day’s drive of two-thirds of the United States population. The area has also long attracted paleontologists with some of the most fossil-laden rocks in North America, where it is easy along some roadsides to pick up fossils dated to be hundreds of millions of years old. The rocks are so well known that they are called the Cincinnatian Series, representing the stretch of time from 451 million to 443 million years ago.

Many of the paleontologists thought the museum misrepresented and ridiculed them and their work and unfairly blamed them for the ills of society.

“I think they should rename the museum — not the Creation Museum, but the Confusion Museum,” said Lisa E. Park, a professor of paleontology at the University of Akron.

Dr. Bengtson noted that to explain how the few species aboard the ark could have diversified to the multitude of animals alive today in only a few thousand years, the museum said simply, “God provided organisms with special tools to change rapidly.”

“Thus in one sentence they admit that evolution is real,” Dr. Bengtson said, “and that they have to invoke magic to explain how it works.”

But even some who disagree with the information and message concede that the museum has an obvious appeal. “I hate that it exists,” said Jason D. Rosenhouse, a mathematician at James Madison University in Virginia and a blogger on evolution issues, “but given that it exists, you can have a good time here. They put on a very good show if you can handle the suspension of disbelief.”

By the end of the visit, among the dinosaurs, Dr. Briggs seemed amused. “I like the fact the dinosaurs were in the ark,” he said. (About 50 kinds of dinosaurs were aboard Noah’s ark, the museum explains, but later went extinct for unknown reasons.)

The museum, he realized, probably changes few beliefs. “But you worry about the youngsters,” he said.

Dr. Sato likened the museum to an amusement park. “I enjoyed it as much as I enjoyed Disneyland,” she said.

Did she enjoy Disneyland? 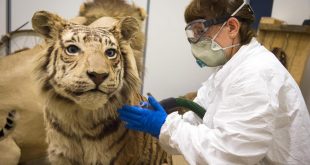 Resources about arsenic in the preservatives of older taxidermy.