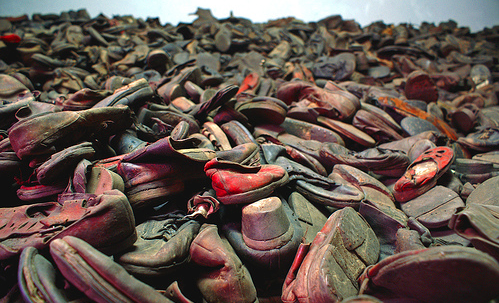 Museum Exhibitions change lives, maybe more than any other media. Sculpture, painting, film, dance, theater and music, all combined with the visitor into one experience.  I believe that museum exhibitions have the opportunity to change lives.

Friday, I visited the United States Holocaust Memorial Museum .   The building is non nondescript, I was struck by the brutality of the steel and concrete, the architecture is very abrupt and bunker like.  Visitors enter through metal detectors.   At the entrance is a picture of Stephen Tyrone Johns, I noticed the picture, but didn’t think much about it until I was leaving the museum (Officer Stephen Tyrone Johns, was killed at the Museum by an antisemite).

I started my visit on the lower level at “State of Deception: The Power of Nazi Propaganda”.  I was struck by the similarities between exhibition design and propaganda, both using, simple messages, theatrical tools, strong visuals, communicating the same message in different methods, repetition of messages and using crowds to build energy.  I am not suggesting the exhibitions are propaganda, but exhibition design does incorporate some of the tools of propaganda.

Next I visited “Daniel’s Story”, to me the exhibition looked dated.

Then I went upstairs to the second floor and visited “From Memory to Action: Meeting the Challenge of Genocide” a nice enough exhibition, although I was the most impressed by the call to action and the use of the Pen Scribe to record their pledges.

I was feeling as if I was missing part of the museum.  I had heard about the museum for years and I knew there was more to the museum.  I went to the information desk and “asked where is the main gallery?”  The docent gave me a map and directed me to the elevator to the left of the entrance.  The wall of the entrance to the elevator is clad is cor ten steel and very imposing. A floor staff memeber gave us an over view of what were we going to see on the three upper floors. The permananet exhibition “The Holocaust” is divided into three floors; “Nazi Assault,” “Final Solution,” and “Last Chapter.”

Starting on the forth floor,  the experience starts with, the “Nazi Assault”, then the third floor with “Final Solution,” then on the second floor with the “Last Chapter”. On the forth floor I was thinking, “okay this is a typical theatrical exhibition”. Then I smelled the odor of the interior of the rail car similar to those used to transport thousands of victims , smelled the leather of thousands of shoes of victims and I felt as if I was being manipulated, by the “Last Chapter”, I was changed.

Yes, I had been manipulated by the exhibition, but I learned to trust the authority of the museum and allowed myself to be changed.  I am a strong believer in the democratization of content, working in a transparent “open source” method and involving the visitor. But, there is no way this story can be told by anyone other than those that lived it. I do not want to hear the thoughts of others, I want exactly what the Museum provided, a clear, concise, well edited, factual, theatrical and life changing experience.  The museum and the Holocaust survivors are the authirity on the content, and we as visitors need to repect the history and the survivors.

I have never thought of walking as an interactive activity, but the museum uses the visitors journey through the museum  from the forth floor, third floor then to the second floor, as a tool to emotionally attach the visitor to the content.  When I was working at Liberty Science Center, we had a simple table top activity, visitors could move a tape head across recorded magnetic tape and hear the recorded sound.  By changing the perspective from moving the tape head, instead of  moving the tape, visitors understood the tape head “reads” information of the magnetic tape.  The Holocaust Museum uses a similar approach, instead of presenting us a theatrical show, we walk across the theater stage and become actors in the show. I loved the white spaces in between each floor, that allowed me to take a breath and go on to the next act in the “show”.  I enjoyed the use of art, included in the museum at each “pause” between the galleries.

In “The Holocaust” galleries, there were children some as young as seven or eight.  Then I understood the need for “Daniel’s Story”, this content is not appropriate for children, but it is important to tell the Holocaust history and “Daniel’s Story” presents the content in a way kids can digest.

When leaving the museum, the brutal bunker architecture made sense , this is a Museum built to survive attacks.

When I reached the second floor of  “The Holocasut” I was changed, I had become emotionally attached to the content.  To be honest I was overwhelmed and wanted to leave the museum. Before I left, I paused at the theater and listened to a Holocaust survivor describing seeing soldiers and taking off his wooden shoe to hit the soldier in the head, the soldier an American said , “I am here to save you, not kill you”.  I stood at the back of the theater and cried.

At the exit to “The Holocaust” gallery:

“First they came for the communists,
and I didn’t speak out because I wasn’t a communist.

Then they came for the Jews,
and I didn’t speak out because I wasn’t a Jew.

Then they came for the Catholics,
and I didn’t speak out because I was Protestant.

Then they came for me
and there was no one left to speak out for me.” 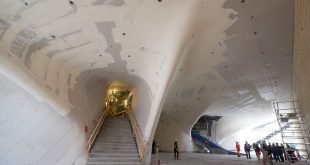